"Life is what happens when you're busy making other plans"

My partner and I decided to head down the coast in the afternoon yesterday and clean our bosses catamaran.

We took cleaning products and a gerni in the hope that we could get her sparkling clean. We set up all the tools and turned on the shore power - only to realise that the shore power wasn't working!

This meant cleaning the 45ft Cat by hand with a chux!! Argh - what could have been a  1hr job took a lot longer as you can imagine.

At least she is now sparkling clean....until the birds get to her. 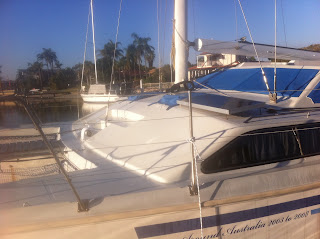 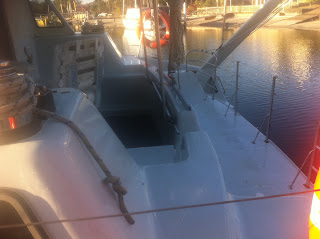 Posted by Unknown at 4:11 PM No comments:

A little bit of Harmony

Finally we have managed to get back out on the water.

This time on a 45ft Catamaran owned by the CEO of our company, who lets my partner and I take the boat out from time to time. (We feel very fortunate to be in a position to do this)

The weather was just perfect! 21 degree's, a slight breeze and lots of sunshine. We decided to take the boat over to Stradbroke Island and set anchor at Tipplers for the day. We arrived at about 10am and layed out on the back deck with cider and a cheese platter....mmmmmmm

The rest of the day consisted of sunbaking, adventuring over to the beach and more sunbaking. How I LOVE winter in Queensland! We also managed to take a few snaps along the way... 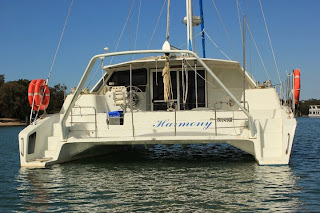 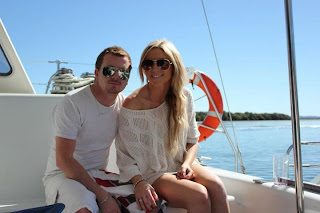 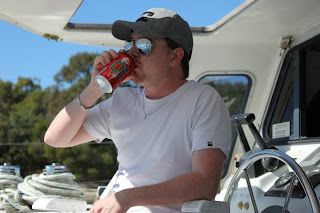 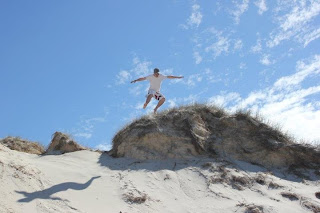 Posted by Unknown at 4:17 PM No comments:

This adventure happened the first time we took out Aussie Escapade, our first boat, the Hartley T16.
All events in the below are true and your probably thinking how could things have gotten any worse - they did! Trust me! It's going to be long but it's worth the read, here we go...

It was the Easter Holidays 2 years ago, we had purchased Aussie Escapade about 5 months prior and she was finally ready to head out onto the water. We had to borrow my parents car as neither of us had a tow bar on ours. We said it was just for the day so they agreed and off we went. We put the boat in at Cleveland point and decided to head out over toward Stradbroke.

We tried with the sails for what felt like 30 minutes to get these things up and finally we were there. We had the music pumping from the cabin, the sun was shining, sails were up, and we were out on the water for the first time. Life was pretty great at this stage. 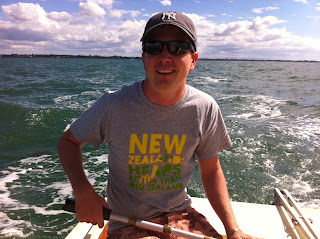 After about 45minutes of sailing we were on our way to Stradbroke Island. I went into the cabin to turn the music up and that's when i noticed most of our stuff starting to float! We hadn't screwed all the floorboards back down as we had been water testing it - so yes the floorboards were floating. 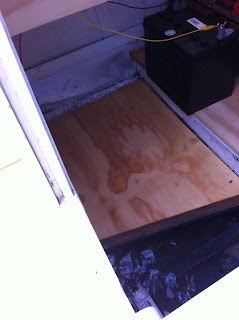 I scremed out to clinton who told me to put the bilge on (not sure why we didnt already have this on) and start taking the water out with a bucket. Now because the framework was quote narror under the floorboards a bucket wouldnt fit down there. So i used a towel to mop up the water and then run out to the back of the boat and ring it out. I did thing about 20 times and the water was only rising! So Clinton asked me to take over sailing whilst he tried to get rid of the water.

Peel island was only about 5 minutes away so I headed for peel so Clinton could assess the damage. We dragged the boat up out of the water (as best we could) and noticed a large hole where we must have missed removing some of the rot. We would have to wait for the tide to go out before we could start repairs. This was going to happen later that afternoon. 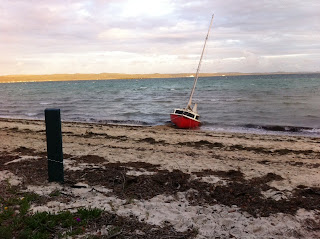 At this time of the day people were starting to leave Peel Island - as you weren't allowed to stay overnight. One couple came over to see if we needed any help. We replied no however the "friendly" guy insisted he help. He said to us the boat should be facing sideways to the ocean - so Clinton and the "friendly" stranger turned the boat around. As soon as this happen the waves started pouring into the side of the boat along with all the seaweed in Moreton Bay i think! The guy realising he had done a lot more damage then good farewelled us and wished us luck. We were then left to hold the boat until the tide went back out so it didnt get taken out to sea.

We stood there for a good 2 hours waiting for the tide to go out so we could patch the boat. Clinton removed some of the wood from inside the boat and used it to patch the hole. We found a role of duct tape in the boat from the previous owner and thought we could use this - we started unrolling only for find about 20cm left of the role! So we used up what we had and the wood and were going to hope for the best.

We made a fire on the island - despite all the signs telling us not to. It was Autumn, all our clothes were wet and we weren't getting out of here anytime soon! Most of that night was spent digging a trench around the boat so that when the tide came back in the water didnt come into the boat again - we were going to have to turn her into the ocean. We took about 3 hours to dig the trench around the boat, were were cold and exhausted. We decided to phone Air Sea Rescue and see if they could come and tow the boat - as we weren't ging to risk sailing it again.

Air Sea rescue arrived at about midnight and said they could tow us back to Cleveland Point where mum's car was parked. This meant going home to a hot shower and bed - we couldnt have been more excited! After Air Sea Rescue assessed the damage they advised it was too risky to tow back to Celeveland incase it sunk. So they offered to tow us to Stradbroke Island and we had to pay them $250 for helping us.

They left us anchored at stradbroke island in a sinking boat. By now the rain had settled in and im not talking about a light shower - this was heavy rain. We could not sleep because the boat was sinking and we took it in turns at removing the water. The boat smelt so bad as all the seaweed was still inside. It felt like forever until daylight.

Once there was daylight Clinton said he would go and find the barge and head over to Cleveland to bring mum's car back and pick up the boat. He left me standing in the water at Stradbroke, holding the boat for 3 hours in the pouring rain. (This is how long it took to run to the barge, go over to Cleveland, run the 5km from the barge to where our car was parked, drive the car back to the barge, and come and pick the boat up.)

Seeing mum's car was quite a relief (to say the least) however Clinton didn't look too happy when he arrived. He told me that because it was a public holiday we might not be able to get home until Tuesday (today was Sunday) AND the barge had cost him $275!

We decided to just line up in the endless rows of cars and hope for a spot on the barge that day. We were in line until 3pm when they finally said we could board. This was seriously one of the best moments of my life. This meant we were heading home to a hot shower, a toilet and bed!

$525 lighter and a day later we were finally back home. We had gone through a lot in the past 36 hours and through it all we stayed strong. This will definitely be a great story for the kids!

Posted by Unknown at 9:23 AM No comments:


I have been a little preoccupied lately and have not been on to blog and catch up on the blogs i regularly read!

My partner and I have moved place and have been busy moving furniture, unpacking boxes and cleaning. Unfortunately we still have no internet connection (another reason why i have not been able to blog).

The second State of Origin game was also played on Wednesday night and we lost, this is going to make the third game very exciting indeed!

Working in an accounting firm and it being almost the 1st of July also means we are both crazy busy at work.

Okay perfect example - i started writing this blog at 8am this morning, check my computer tabs just now (4:45pm) and note i still have not published this! Ahhh it's going to be a long tax season!!

Posted by Unknown at 4:46 PM No comments:

So tonight is the first game of 'State of Origin' in a series of three, and it is a very big deal. This may be the first "big deal" day this year in my partners eyes.

We will be heading out to the pub tonight to watch the game and get drunk if we win, and drunk if we lose!

QLD has won 6 years in a row now so we definitely wont be going down without a spectacular fight.

May the best team win!

Posted by Unknown at 7:56 AM No comments:

After surfing the net this morning on all things sailing related i stumbled across Hamilton Island Race Week.

There is a company out of Moreton Bay that sails from Moreton to Hamilton Island and back and offer crew to come aboard for each leg of the way.

Due to work it would be hard to take leave at the start of August however it could be possible to crew the leg from Gladstone back to Brisbane in September. This would take approx. 5 days.

My partner and I have done a sailing course with the Southport Yacht Club (the same place Jessica Watson learnt to sail) and I'm wondering if this journey would be worth the money and experience?

If anyone reading this has sailing down the QLD coast, or more specifically Gladstone to Brisbane please let me know your thoughts.

Dates for this would be 2nd - 6th September.


Enjoy your hump day!
Posted by Unknown at 8:20 AM No comments:

Okay so the next toy that i want is a Hobie Cat. I haven't been sailing since we went to the Whitsundays and i need (want) to get back on the water!

We cannot afford too much at the moment however I have been looking at www.boatpoint.com.au and have seen quote a few Hobie Cats for sale for under $2000, now this we could afford.

It's coming into winter now so it might be a bit cold, plus moving into our apartment we would have to leave the boat at my parents house.

Wishful thinking - a girl can only dream!!
Posted by Unknown at 8:18 AM No comments: 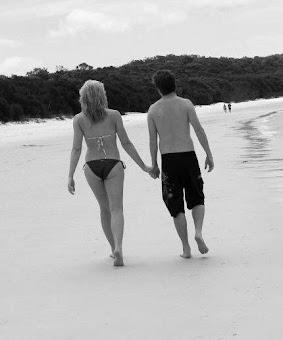